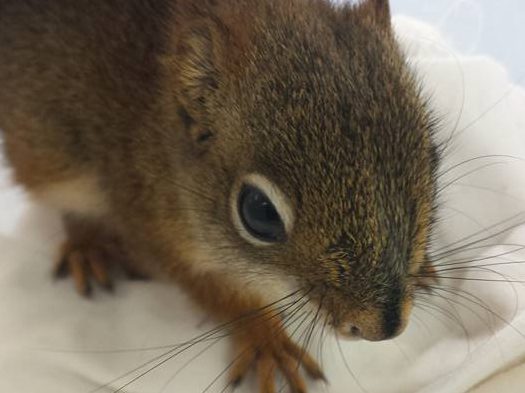 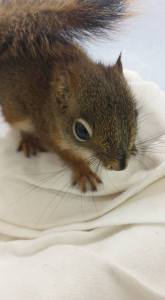 Our patient of the day for May 23rd was this little American Red Squirrel. The Red Squirrel is one of several species of tree-dwelling squirrels in North America. It’s much smaller than the Gray Squirrel, though very bold and territorial. It’s not uncommon to see one of these little red-heads chasing off a much larger Grey Squirrel in defense of its nest (or your back-yard bird feeder).

Red Squirrels are considered pine squirrels, as their natural diet consists primarily of conifer seeds. They’re found in much of North America, with the exception of the Pacific Coast (where the more localized Douglas Squirrel occupies that ecosystem). Although there is also a “Red Squirrel” common to Europe, it is not the same species as the American Red Squirrel. Red Squirrels are frequent visitors to feeders in rural areas, and their range appears to be widening.

Babies are born in litters of one to five (though most commonly three or four), and they often stay with their mother for about 10 weeks. Females will often have several nests, and move their young between nests to give them more protection from predators.

Many species prey on Red Squirrels, such that the survival rate to one year of age is only about 22%, and the average lifespan approximately 2.3 years, although Red Squirrels as old as 8 have been recorded.

This site uses Akismet to reduce spam. Learn how your comment data is processed.

The welfare of our animals depends on the generosity of our supporters. We thank you for your kindness. We couldn't do it without you!

The Animals Thank You!