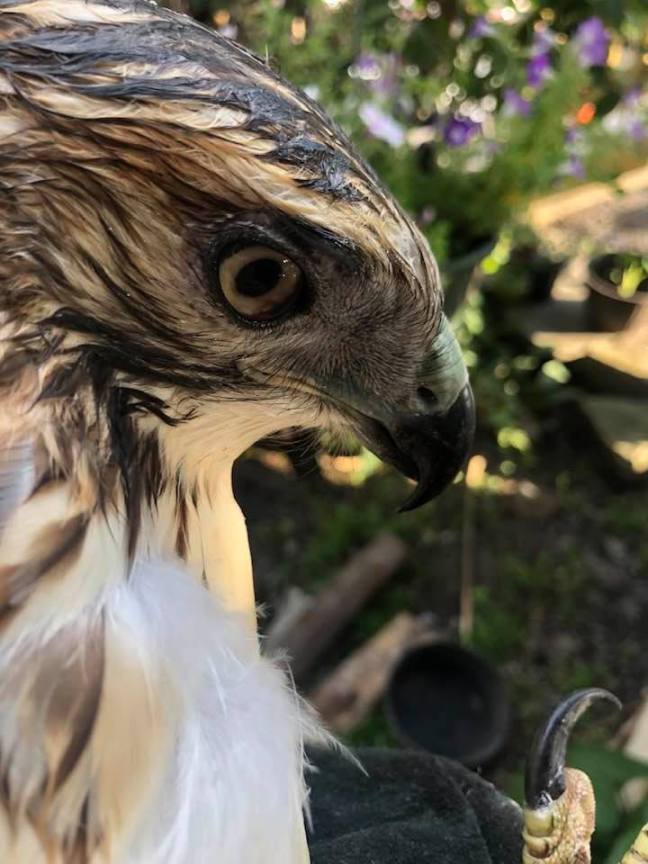 Kelly Martin has a couple of new patients today. Here are her photos and posts from Facebook (shared with permission).

This juvenile red tailed hawk was found Saturday on the ground and unable to fly. This is one of my ‘it takes many hands’ posts. First is the caller who cared enough to to seek help. Then the Town of Bethlehem Police who waited at the scene and called me. Since that is about an hours drive for me, they called Kevin, their Animal Control Officer who met me part way. I love it that there are towns that pay for animal control and not just dog control and that some officers will aid wildlife. I suspect West Nile Virus as the bird has no injuries but cannot ‘see’ things right in front of it. I provided some initial treatments and have been hand feeding it, but it is time for the experts to definitively diagnose the problem. So the next step was to get it to Cornell’s wildlife health clinic via the wonderful Claudi Neff who drove all the way to my house to pick it up. She also ended up taking a great horned owl with eye trauma and a painted turtle with a severe leg injury. Oh, and she had already been to Cornell to bring back a porcupine I had sent there a few weeks ago. I am exhausted just thinking about her trip! I should hear soon what Cornell finds in this beautiful bird. Thanks to all.

And another story that I hope ends well. Those of you who live in the Rensselaerville area know of the Kuhar Family Farm Cafe, and of course the Micah Burger. Well this is the Micah bird. Micah called yesterday as he had seen a hawk on the roadside and when he drove past again an hour later the bird was still there. So Kate and I met Micah and we drove to the scene. After a half hour of us searching and searching – no bird. I asked Micah to check later. Usually, despite good intentions, most people don’t follow through. Micah did and it was dark when he called to say he had found the bird! I believe this is a juvenile broad wing hawk, small relative to the bigger red tail. The bird was very weak and loaded with disgusting hippoboscid flies, a creepy flat fly that scoots under feathers and is a blood sucking parasite. They quickly leave the bird and land on whatever else is nearby. I hate them! I find no injuries on this bird but it is very thin. So a youngster that is not yet a successful hunter. It is very small so probably a male. Supportive care is in order and need to fatten him up. Whether that can be done before migration is yet unknown. They can go all the way to SA so strength and good condition is a necessity.

This site uses Akismet to reduce spam. Learn how your comment data is processed.

The welfare of our animals depends on the generosity of our supporters. We thank you for your kindness. We couldn't do it without you!

The Animals Thank You!